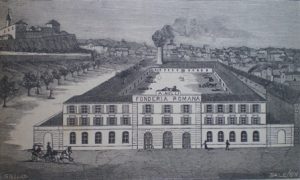 Alessandro Nelli was born in Rome on 28th January 1842. As a young boy he studied for 4 years under the bronze founder Antonio Messina. Messina cast in silver as well as bronze.

Alessandro Nelli’s foundry was situated at 43, Via Luciano Manara, Rome and covered an area of some 5000 square metres. Nelli also had 2 retail outlets in Rome, one at 139, 140 and 140A Via del Babuino, and the other at 58, Via Santa Chiara.

The Nelli foundry building was ceded in 1881 by the Comune [of Rome] to Alessandro Nelli, after being expropriated from the Reformed Fathers of San Pietro in Montorio. A favourable price was agreed on condition that Nelli constructed there a foundry for works of art in metal which would increase and complement the work of the foundry that already existed in Via della Lungara.

According to the first proposal, prepared by the engineer Innocenti in 1881, the foundry – where important works in bronze were produced – had its principal elevation of two floors in Via Manara, while the rest of the building (dedicated to the foundries, services and various workplaces) was only one storey high.

From the description of the building made in the estimate prepared in 1887 to obtain a mortgage, we can deduce that the building was constructed with great care with shaft foundations and barile, walls of tufa “from the best quarries in Rome”, and vaults with I-beams in iron “of foreign origin” (Germany).

The quality of the building made it possible in 1888 to plan a superstructure for the whole building, completing a further two floors with attic on Via Manara and all of five floors on Via Garibaldi: to this phase is assigned the fine façade along Via Manara, visible today, designed by the architect Viro Guerrieri.

The sums needed to carry out these works – whose purpose was to provide accommodation for the 250 employees of the foundry – came to £216,000 and, to get the work underway, Nelli became indebted to the Banca Tiberina, the Banca Nazionale and to Alessandro Spada. It was certainly the default of Nelli that caused the building to be transferred to the Banca d’Italia in 1897, which then transferred the ownership to the Istituto Romano dei Beni Stabili in the context of the general transfer of 1905: the following year the engineer Gennaro Stendardo of the Projects and Works Office of the Institute applied for a license for “restoration of the factory […] ..does not meet health requirements”. The Municipality, analysing the project from a health point of view, asked that three rooms to the left of the entrance be eliminated since, being at street level, they could not constitute a living area and were destined to be stores.

The Nelli building, after many years of being managed by the Istituto Romano dei Beni Stabili, was ceded in the 1970s to the Bastogi firm whose project of complete renovation of the accommodation areas and the construction of parking spaces under the courtyards has definitively made the original appearance impossible to discern.

Nicholas goes on to say that, according to a Professor Trastulli, Alexandre Nelli was invited to work for the Tsar in Russia and died there in the early 1900s. This can be dated more accurately thanks to ‘The Metal Industry’ New York  of February 1905 (vol iii number 2). This carried an article titled ‘Casting Bronze by the Cire PerdueProcess’, and stated  About fifty years ago, Mr Alessandro Nelli, of Rome, discovered a method which allowed him to do away with the sand painting of the wax pattern and established a quick process by which from a plaster cast or any other pattern a perfect reproduction could be made in a short time. This process resulted in castings having a good, smooth surface and did away with fins and shoot-byes, which are almost impossible to avoid in the dry-sand, false core moulding process. Mr Nelli, in less than half a century, raised himself from very moderate circumstances to considerable wealth by doing all kinds of small and large ‘’Lost Wax’’ statuary work for all over Europe and North and South America. He so increased the work that when he died, a little over a year ago, he left a plant which is to be classed as one of the largest artistic bronze foundries in the world and is a monument to his skill and success. 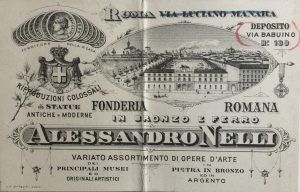 Nelli’s catalogue of 1889 (which has been translated from its original French), quoted from hereunder, provides his history and awards, as well as castings past and to 1889. 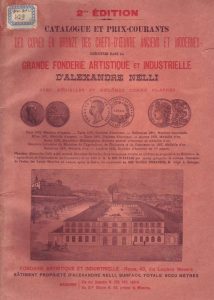 The first experiments by Alexandre Nelli go back to 1857.
Between 1862 and 1882 he cast important pieces in one of his houses on Della Lungara Street, one of them being the great statue of Arnauld da Brescia, measuring 5 metres high.

As his work was becoming more popular, he decided to build a larger workshop, which was to become one of the largest casting plants in Europe.

Towards the end of 1881 he started to build the current premises on a 5000 square metres site at the foot of Mount Janiculum.

It included a large square building with a spacious rectangular court in the middle. One side of the building belonged to the casting plant where one could find large ovens for melting bronze, cast iron furnaces; great spaces dug into the earth for melting bronze. There were railway tracks to carry liquid metal, and cranes to lift buckets full of metal and statues and other objects already cast. On the other side of the building, workers were busy modelling, finishing and embellishing masterpieces.

The factory had acquired the latest tools, material and instruments. The division of labour was well organised amongst the workers who used ancient and modern methods along with a newly invented system by Mr Nelli made up of sand and wax.

Amongst the most important pieces sent from Rome abroad are:

1 General Sa de Bandeira group of statues currently in Portugal. Height of the main statue is over 6 metres.Sculptor:Mr Ciniselli.

2 A monument dedicated to the memory of Isabelle the Catholic in Madrid made up of two standing figures (2.10 metres high) and a horse (3.50 metres high). Sculptor: Mr Manuel Oms

Amongst the masterpieces that stayed in Italy are:

4 The great monument dedicated to King Victor Emmanuel  II commissioned by the city of Venice. The King is on a horse (4.50 metres high) with two figures on his side (2.80 metres high), one representing Venice in slavery and the other Venice as a free city. Sculptor: Mr Ettore Ferrari.

5 The largest monument of King Victor Emmanuel II for Turin cast in front of the King and Queen of Italy. The figure of the King measures 8.50 metres high. Sculptor: Mr Pietro Costa.

The factory was awarded the following medals up until 1889:

(The catalogue also carried the following announcement and index:)

The factory is commissioned to cast objects of all sizes. This can be done by sending a photograph of the object indicating the measurements. The modelling fees are covered by the factory.

The most famous coat of arms are reproduced there, including military goods such as breast plates, swords, helmets that are exhibited in museums in Italy, in The Louvre, in Dresden and Windsor. Amongst all coat of arms, Cellini’s masterpieces are also reproduced there.

Page 11-14 includes arches, columns, obelisks, temples, the Coliseum in Rome, the Immaculate Conception monument on the Spanish Steps in Rome. 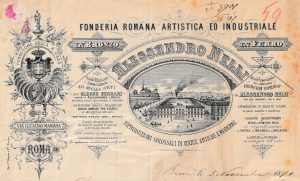 By 1891, as well as advertising works in iron, Nelli was also offering various objects for religious worship, including monstrances, reliquaries and chalices. Advertised as a compete service for bishops, he offered these products through the firm of Cleofe Ferrari, conveniently situated at 10 and 13 Via Borgo Nuovo, just outside the gate to the Vatican City. As well as the religious objects, Cleofe Ferrari  also offered goldsmiths’  wares, mosaic pieces, a large assortment of copies of paintings by known artists in enamelled porcelain, ascetic books in a number of languages, and oleographs and photographs of saints. All of these items could be sent to purchasers, for the additional payment of postal charges. Also, from his premises at 139 and 140a Via Del Babuino, Nelli was advertising a large exhibition of his works, including objects in ancient and modern stones. Varied assortment of works from the main museums and artistic originals, in silver, bronze and stone, all chiselled in imitation of the antique.